Learn more about our fine selection of honey and pure maple syrup.

Canada is perhaps best known for its mild flavoured, light coloured clover honey, but it also produces a variety of other unique flavours. Buckwheat honey is dark in colour and has a strong distinctive flavour. Wildflower honey is a deep golden with a flavour stronger than clover, but not as strong as buckwheat. Wildflower honey's flavour can vary slightly from year to year, and area to area, depending on which wildflowers were in abundance..

Canada is renowned for its low moisture honey. Canada No.1 honey has a maximum moisture content of only 17.8%. This, along with Canada's very high quality standards and regulations, allows it to retain its high-quality for long period of time.

Canada can be counted on for quality honey year after year.

HONEY PRODUCES ENERGY AND IS A VALUABLE FOOD

Since 75% to 80% of its composition is naturally occurring simple sugars, honey has quick energy-producing value. Little digestion is necessary and absorption takes place quickly. Honey is quick energy for all ages.

Other sweeteners, such as regular table sugar must be broken down into simpler sugars by our digestive system before they can be absorbed into the blood stream.

Honey is not recommended for children under the age of one year. People with diabetes or other sugar related medical concerns, should talk to their doctor before eating honey.

Honey is a Valuable Food

In addition to its sugars, honey contains as its minor components, a number of minerals, seven members of the B vitamin complex, ascorbic acid (vitamin C), dextrins, plant pigments, amino acids, other organic acids, traces of protein, esters, and aromatic compounds, and several enzymes. Some honey, such as buckwheat honey, also contains antioxidants.

Levulose has been called the queen of sugars. It is sweeter than cane sugar, and besides its sweetness, it carries to the human senses something that might almost be called flavour. In a pure state, levulose is difficult to obtain, but it occurs naturally in mixtures with other sugars no only in honey but in many fruits. It dissolves very readily in water.

Dextrose is a sugar of quite different nature. It is about three-fourths as sweet as cane sugar, dissolves in about its own weight of water at ordinary temperatures, and crystallizes from a water solution quickly when it occurs in more than that amount. (It is this sugar in honey that forms crystals.) It should be noted that in the average honey, the percent of dextrose is roughly twice the percent of water, therefore on standing, dextrose crystals will be formed. It is because of this that honeys granulate.

If crystals form in honey quickly, they are usually small, whereas if they form slowly, they are coarse. These differences involve no chemical changes, only a difference in the size of the crystals. In the markets we find specially processed, finely crystallized honey or smooth, creamy texture. It is all honey and sold as creamed, spun or spread.

THE SCIENTIFIC PROPERTIES OF HONEY

The average chemical composition of Honey 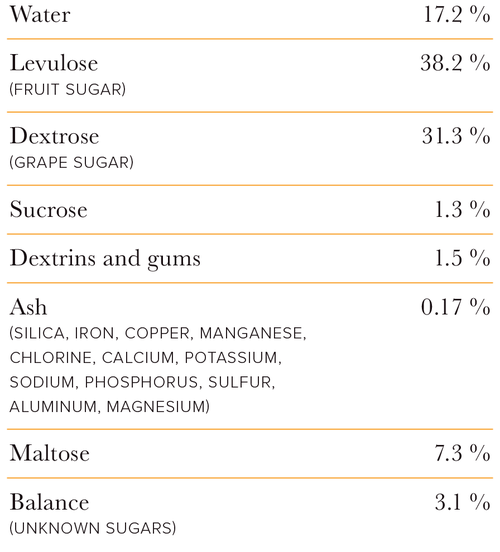 ABOUT BEES AND HONEY

In years gone by, wooden buckets, and later metal pails were hung on metal spiles which were hammered into a hole drilled into the trunk of the maple tree. Cold frosty nights and warm sunny days cause the sap to move up from the roots and drip into the pails. The sap was collected several times a day by horse drawn sleighs carrying a large vat. The vat was then drawn to the sugar shack where a wood fired evaporator boiled off the excess water form the sap. This left the thick maple syrup.

Today, most maple operations collect the sap by pipeline. Each tree is connected by plastic pipe directly to the boiling facility. Reverse osmosis machines remove about half of the water from the sap, reducing the amount of energy needed to boil the sap into syrup. Oil or propane fired evaporators allow better control of the boiling process, producing a better quality syrup. The closed pipeline system also improves the syrup's quality, keeping our foreign objects which can fall into the open pails or tanks.

Canadian pure maple syrup is graded into five classes according to colour and taste. Canada No.1 Extra Light syrup is almost clear and has a very mild maple flavour. It is used primarily in the making of maple sugar. Canada No.1 Light and Canada No.1 Medium syrup are each slighter darker in colour and stronger in maple flavour than the previous grade. These two grades are most commonly used by consumers; they make an excellent syrup for pancakes, ice cream, waffles, cereal or oatmeal, on slices of fresh fruit, and even eaten all by itself. Canada No.2 Amber syrup is darker and stronger again, and is often used in baking, the stronger maple flavour carries through better. Canada No.3 Dark syrup is very dark in colour and strong in taste. Its primary use is as a flavouring ingredient in food manufacturing, and is not suitable for table use. 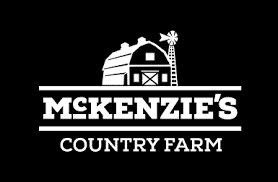